Welcome! If you don't want to miss anything, sign up to receive new posts via email. Thanks for visiting!

Check out my Video Soap Tutorials available here or get more information about the Soap Challenge Club here. 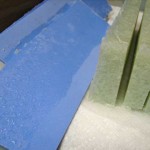 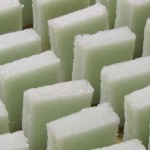 Well, it wasn’t a complete failure, but something isn’t quite right here. Yesterday I completed my first salt bar experiment using 80% coconut oil, 15% shea butter, and 5% castor oil with a 15% superfat. As the soap started to thicken, I added some Mediterranean Sea Salt fragrance oil and a green oxide coloring. Finally, I added Fine Dead Sea Salt equal to the amount of oils and just stirred it with a spoon. I thought it would get pretty thick once I added the salt, but it didn’t. After pouring it into the mold, I put it in the oven at 170 degrees for two hours. It was warm and gelled when I pulled it out. I left the lid on the mold, and four hours later, it was all wet and oozing!! Since it was still warmish, I decided to go ahead and cut it before it got too hard. This was a small batch of soap and I cut it into small bars. I wish I had taken a picture of the pool of wetness on top of the soap before I cut it, but you can see how moist it was. The blue soap mold liners are very wet. I even had trouble getting it out of the mold because the moisture had created a vacuum on the bottom. This morning the soap was harder, but still soft enough for me to break a bar in half. I’m going to see if it will harden as it cures. I’m thinking the culprit might be the type of salt that I used. There are lots of other minerals in the Dead Sea Salt that might interfere with the soapmaking process. Never fear, I have two other types of salt that I plan to try next! (Notice I filed this post under the “Making Soap” category, not the “Botched Batches”!!)